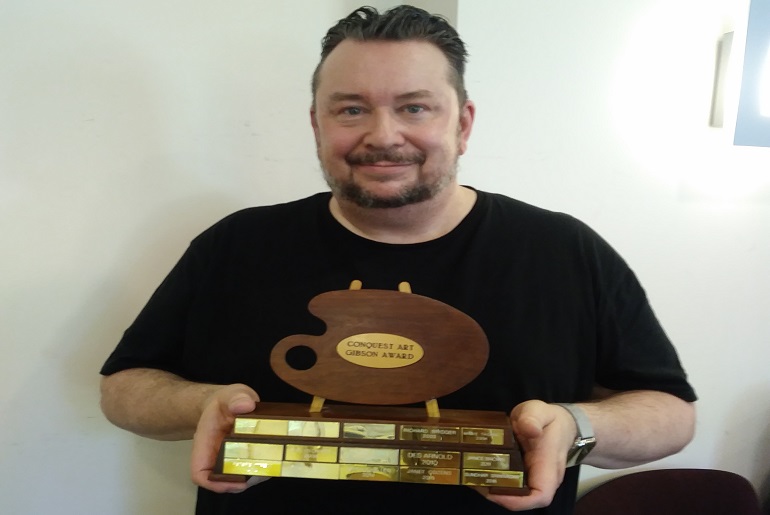 By Conquest Art on 6th September 2022

The Gibson Award was set up at the request of Gladys Gibson and each year we ask our group leaders to nominate a member who has shown particular achievement during the previous year.  As the groups have been closed for some time due to lockdown, group leaders nominated a member in their group who had come back or newly joined and is thriving, being inspired, and has found their creative spark in the group sessions.

From the nominations, one is selected, and the trophy then presented.

It is a great way to hear about our members’ journeys and how Conquest Art is enriching their lives in some way or another.

This year Duncan Siggers from the Woking group was chosen for the award. 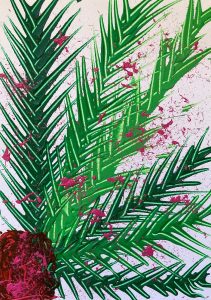 This is a little bit of Duncan’s story told by Woking group leader, Nicole Peay…

I have known Duncan for a few years, and he is one of our most dedicated members.  He attends the art group regularly and is a great member of the group.  He is one of the friendliest persons that I know, and he always arrives with a smile on his face, and he also enjoys chatting to everyone.

His love for paintings began after he retired from work on health grounds.  He said that attending the Conquest Art group has helped him immensely mentally and physically.  He is very enthusiastic to share his new ideas with everyone.  He finds his new skills very therapeutic, and this helps him to cope with life.  He has produced some beautiful paintings and he has sold some of them, which is quite encouraging.  He has an Instagram account where he has over 1,727 followers.

Michael Bryne (Trustee) went, accompanied by his wife Ruth, to Woking on 9th August to present the trophy to Duncan.  Michael said that “There had been some very high-quality submissions this year for the Gibson Award from some very talented artists, but Duncan had made good progress in the view of the judges and was a worthy winner.”