Home » Our Stories » Tribute to Kit Masters (Our Ex-President) 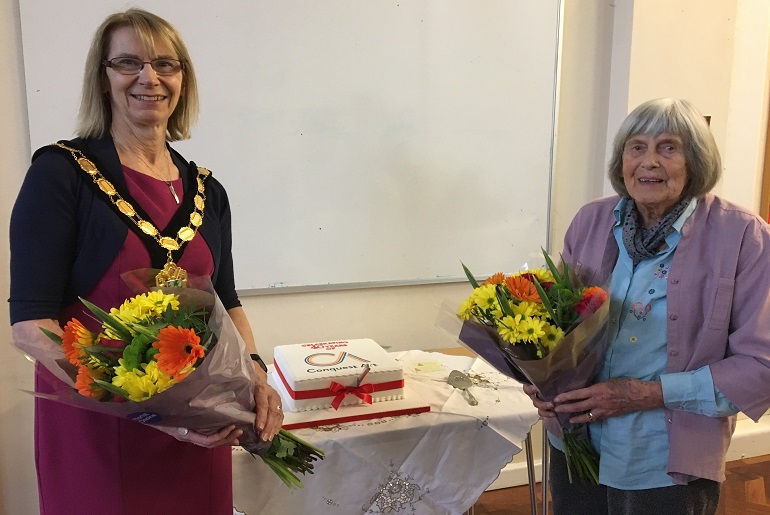 Tribute to Kit Masters (Our Ex-President)

In this fortieth year of Conquest Art I would like to pay tribute to Kit Masters and some of those inspired folks who, alongside the indomitable Ursula Hulme, established Conquest Art. Without them the Charity would not have officially been created. 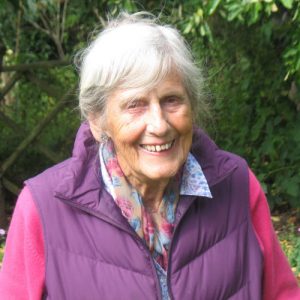 Sir Alex Atkinson is sadly no longer with us, but he was our first Patron and we now have the privilege of his daughter Charlotte working as a helper at the St. Paul’s group and a valued Trustee.

It was with great regret that the Trustees accepted Kit Master’s resignation as the much-valued President of Conquest Art. Kit and her son, Rupert attended the Annual Meeting and explained that she felt health problems prevented her from continuing in the role.

Kit was presented with a painting done by a Godalming member, a ceramic palette and flowers as tokens of gratitude for her many years of service to Conquest members.

May I here heartily pay Tribute to Kit who first met Ursula our Founder in the 1960’s and fell under Ursula’s spell a few years later at an Art exhibition.  At that time Ursula was already running a group at Rentwood, which housed the Association for the Visually Impaired and Kit joined her there as a helper.  The group at St. Paul’s (Cheam) had also become established under the umbrella of Art for Physically handicapped people.

Kit, Alex Riveley, Marianne Tilley and Abigail Freedman decided that a proper society should be formed.  So, in 1978 Kit was a major driving force in the creation of Conquest Art as a proper Charity. She then worked tirelessly on the management committee, later becoming a Trustee.

Meanwhile a group had been established in Godalming and when the leader had to retire Kit took over the running of that group which went on from strength to strength.

In order to get the new Charity better known Kit suggested the publication of a magazine. She went around the growing number of groups getting paintings and contributions and for many years was the Editor of the magazine then called Spectrum.  Eventually, the late Jill French took over the compilation and Editing of the magazine.

Kit retired as a Trustee 10 years ago and on losing Ursula at a grand old age Kit became our President in 2012.  In 2013 Kit was very justly awarded an MBE for the invaluable work and contribution which she has made to this special and wonderful Charity. We owe her a great debt of gratitude. 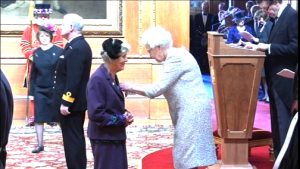 So, it was with great regret that we had to accept Kit’s stepping down from her role as President of Conquest Art.

It seems inadequate to simply say a big thank you Kit but there are no other words of gratitude except to acknowledge the huge, immeasurable contribution which she has given to Conquest Art, every past and present member is grateful for her inspiration, dedication and sheer hard work over more than four decades. So, we all say a thank you very very much for everything and wish Kit improved health and many years of happy painting.